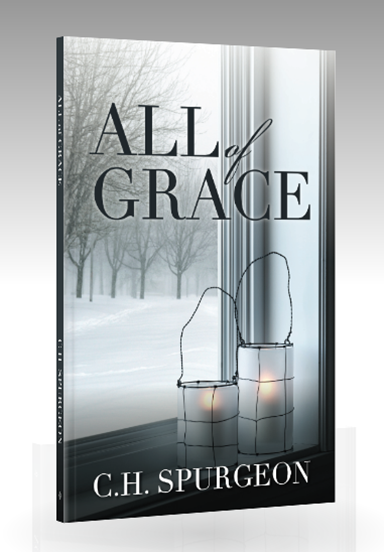 All of Grace is said to have been Spurgeons’ all-time best-selling book. Spurgeon brilliantly, with warmth and personal stories, presents God’s plan of salvation, clearly and simply. He explains that salvation is not based on our own works or our own righteousness, but on the sacrifice of Christ alone. After spending some time with this book, your heart will overflow with gratitude to our Savior for his infinite gifts of grace and mercy. Spurgeon finishes this book with a request to “meet me in heaven.” What a wonderful day that will be!

CHARLES HADDON SPURGEON (19 June 1834 – 31 January 1892) remains highly influential among Christians of various denominations, among whom he is known as the “Prince of Preachers.” It is estimated that in his lifetime, Spurgeon preached to around 10,000,000 people. Spurgeon was the pastor of the congregation of the New Park Street Chapel (later the Metropolitan Tabernacle) in London for 38 years. He was a prolific author of many types of works including sermons, an autobiography, commentaries, books on prayer, devotionals, magazines, poetry, hymns and more. Many sermons were transcribed as he spoke and were translated into many languages during his lifetime. Spurgeon produced powerful sermons of penetrating thought and precise exposition. His oratory skills held his listeners spellbound in the Metropolitan Tabernacle and many Christians have discovered Spurgeon’s messages to be among the best in Christian literature. He suffered ill health toward the end of his life, afflicted by a combination of rheumatism, gout and Bright’s disease and often recuperated at Menton, near Nice, France, where he died on 31 January 1892.

Be the First to Review “All of Grace”