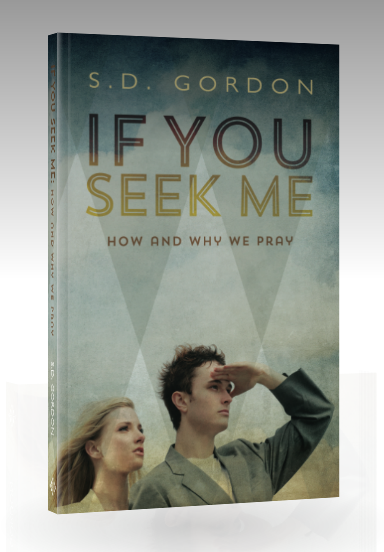 If You Seek Me

Does prayer influence God? Where does the “power” God speaks of come from? Why aren’t my prayers answered or why are they delayed? How do I pray? How did Jesus Pray? Why did Jesus pray?

If You Seek Me was originally published in 1904 as Quiet Talks on Prayer and was part of the “Quiet Talks” series by S.D. Gordon. This book is a treasure trove of answers to the deepest questions on the “hows” and “whys” of prayer. The “Quiet Talks” series has been collected and reprinted many times, having sold in the neighborhood of some two million copies.

“A strong will perfectly yielded to God’s will, or perfectly willing to be yielded, is His mightiest ally in redeeming the world.”

“Whatever of heart yearning there may be that moves you to prayer is from Him. God takes the initiative in all prayer. It starts with Him. True prayer moves in a circle. It begins in the heart of God, sweeps down into a human heart upon the earth, so intersecting the circle of the earth, which is the battlefield of prayer, and then it goes back again to its starting point, having accomplished its purpose.” —S.D. Gordon

SAMUEL DICKEY GORDON (12 August 1859 – June 1936) ministered the deep things of God. He was not an ordained minister. He could boast no academic degrees. A plain man, controlled by a deep desire to edify God’s people, he won the respect of the learned and at the same time the affection of the simple. Gordon lived a long and useful life. He was born in Philadelphia and a public school education was all the academic training he had. As a young man, he was hard working, consecrated and sought the best God had for him. Between 1896 and 1900 he traveled to Europe and the Orient as a missionary. Gordon authored some twenty-five books, the majority of which were devotional books under the general theme, Quiet Talks. His quiet manner, simplicity, illustrative quality and gentle spirit won for him a great following wherever he went. Altogether he produced twenty-five books. Paperback: 204 pages
Publisher: Letcetera Publishing (January 25, 2015)
Language: English
Paperback ISBN-13: 978-1942796169
e-Book ISBN-13: 978-1942796206
Product Dimensions: 5.2 x 0.5 x 8 inches
E-Book: $3.99
The buttons below are links to the various e-book retailers.

Be the First to Review “If You Seek Me” Cancel reply