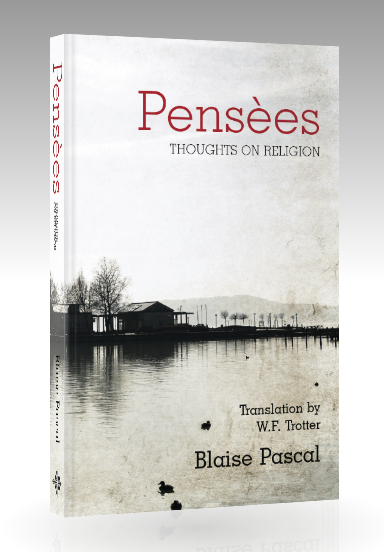 “For after all what is man in nature? A nothing in relation to infinity, all in relation to nothing, a central point between nothing and all and infinitely far from understanding either. The ends of things and their beginnings are impregnably concealed from him in an impenetrable secret. He is equally incapable of seeing the nothingness out of which he was drawn and the infinite in which he is engulfed.” —Blaise Pascal, Pensées No. 72

Pascal’s most influential theological work, referred to posthumously as the Pensées (“Thoughts”), was not completed before his death. It was to have been a sustained and coherent examination and defense of the Christian faith. The first version of the numerous scraps of paper found after his death appeared in print as a book in 1669 and soon thereafter became a classic.

Pascal’s Pensées is widely considered to be a masterpiece.

BLAISE PASCAL (19 June 1623 – 19 August 1662) was a French mathematician, physicist, inventor, writer and Christian philosopher. He was a child prodigy who was educated by his father. On 23 November 1654, between 10:30 and 12:30 at night, Pascal had an intense religious vision and immediately recorded the experience in a brief note to himself which began: “Fire. God of Abraham, God of Isaac, God of Jacob, not of the philosophers and the scholars…” and concluded by quoting Psalm 119:16: “I will not forget thy word. Amen.” He seems to have carefully sewn this document into his coat and always transferred it when he changed clothes. Following this experience, he began writing influential works on philosophy and theology. His two most famous works date from this period: the Lettres provinciales and the Pensées. Pascal had poor health, especially after his 18th year, and his death came just two months after his 39th birthday. Paperback: 330 pages
Publisher: Letcetera Publishing (January 5, 2015)
Language: English
Paperback ISBN-13: 978-1942796091
e-Book ISBN-13: 978-1942796190
Product Dimensions: 5.5 x 0.8 x 8.5 inches
E-Book: $3.99
The buttons below are links to the various e-book retailers.

Be the First to Review “Pensees”